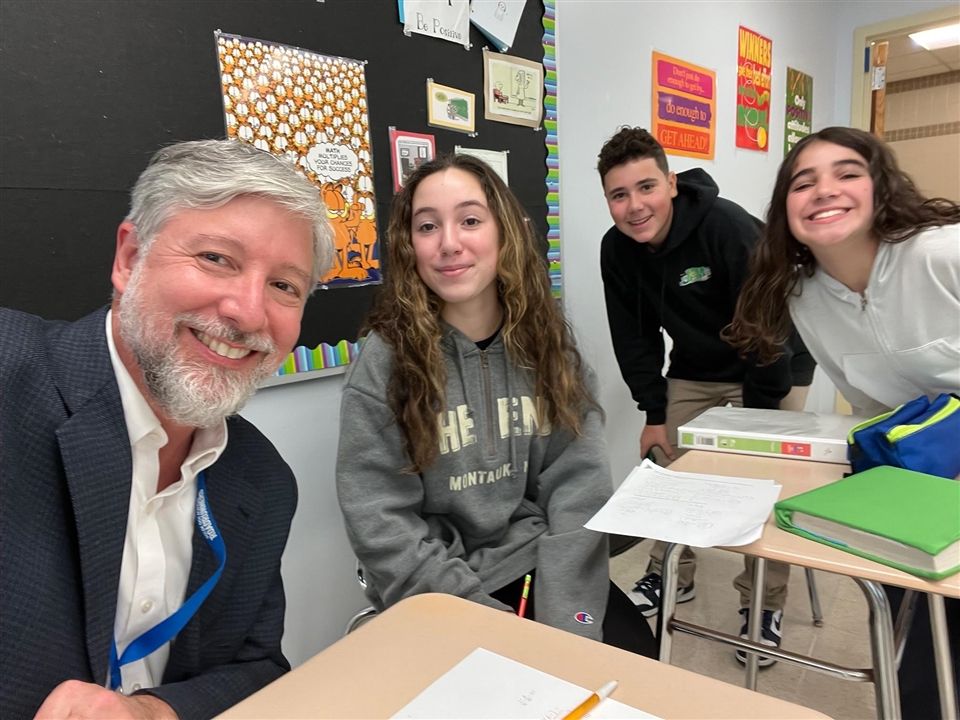 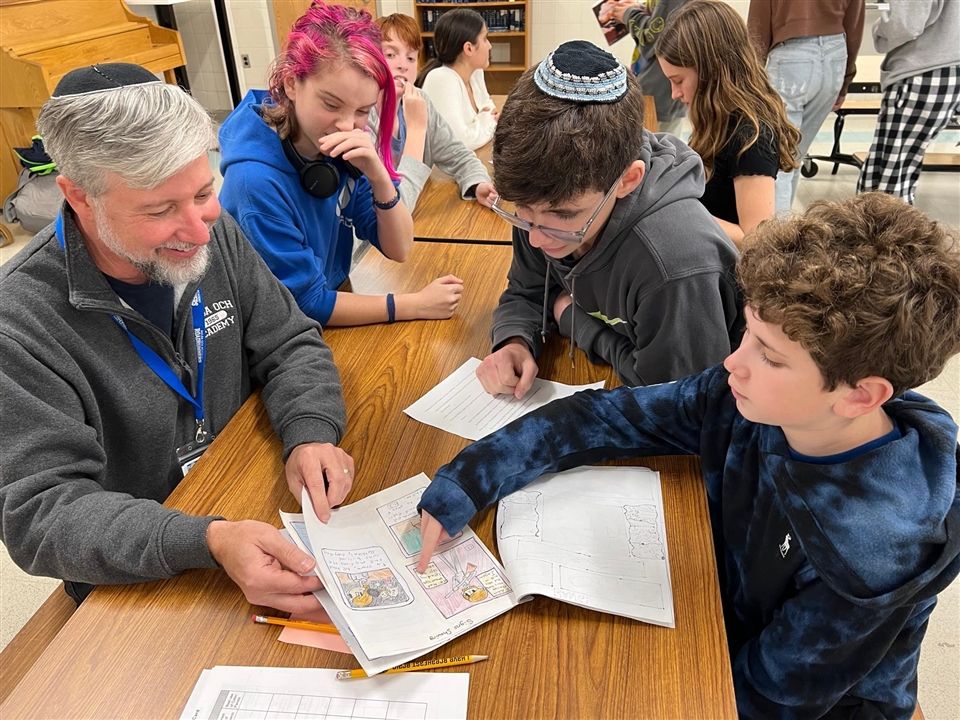 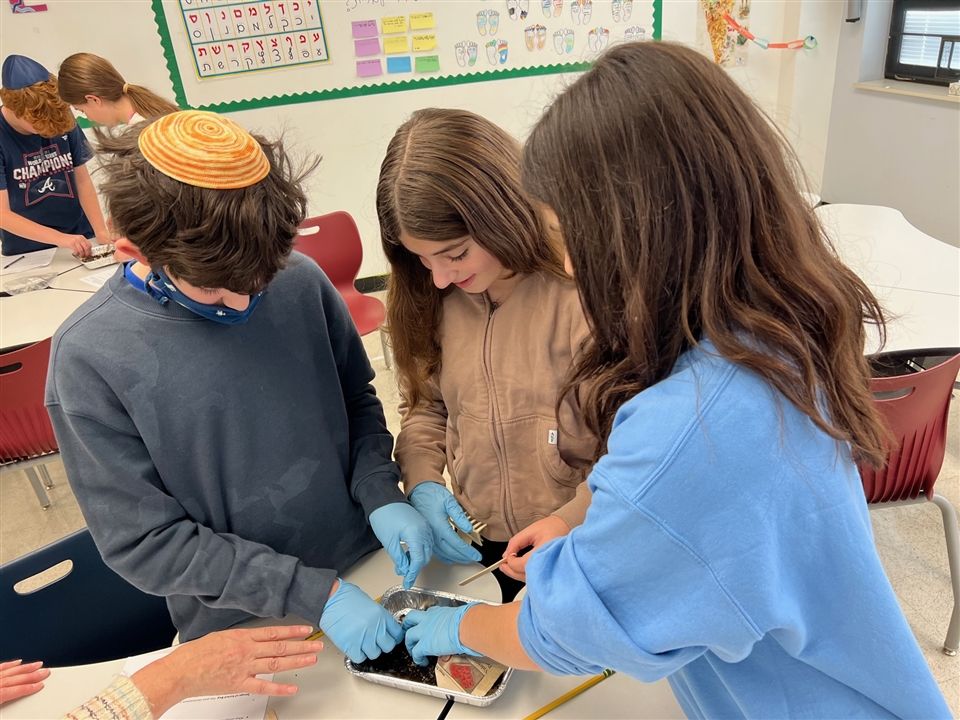 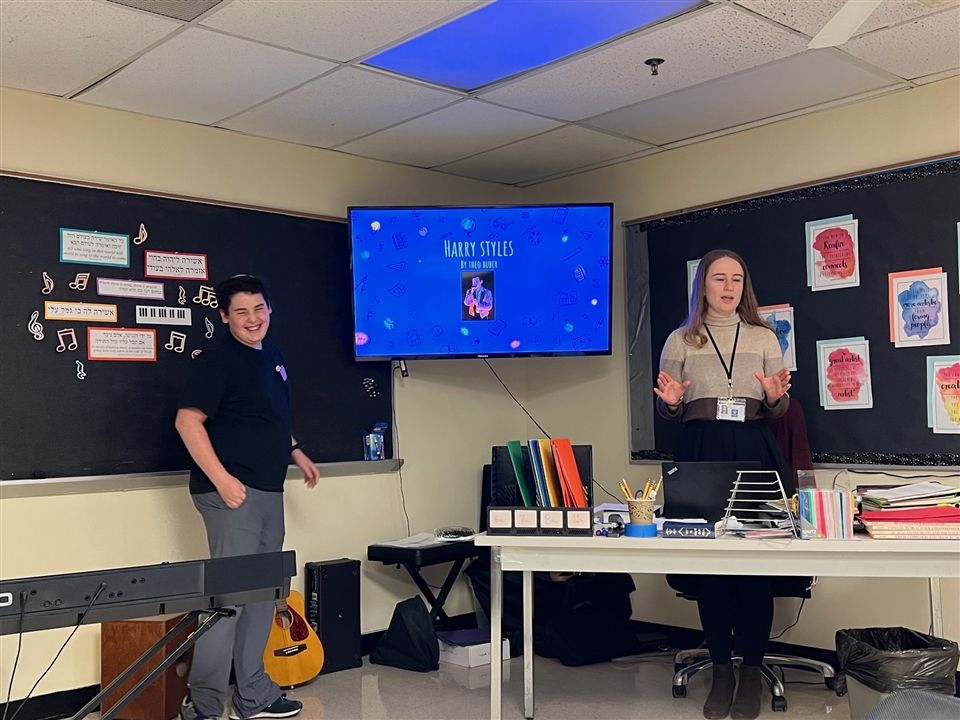 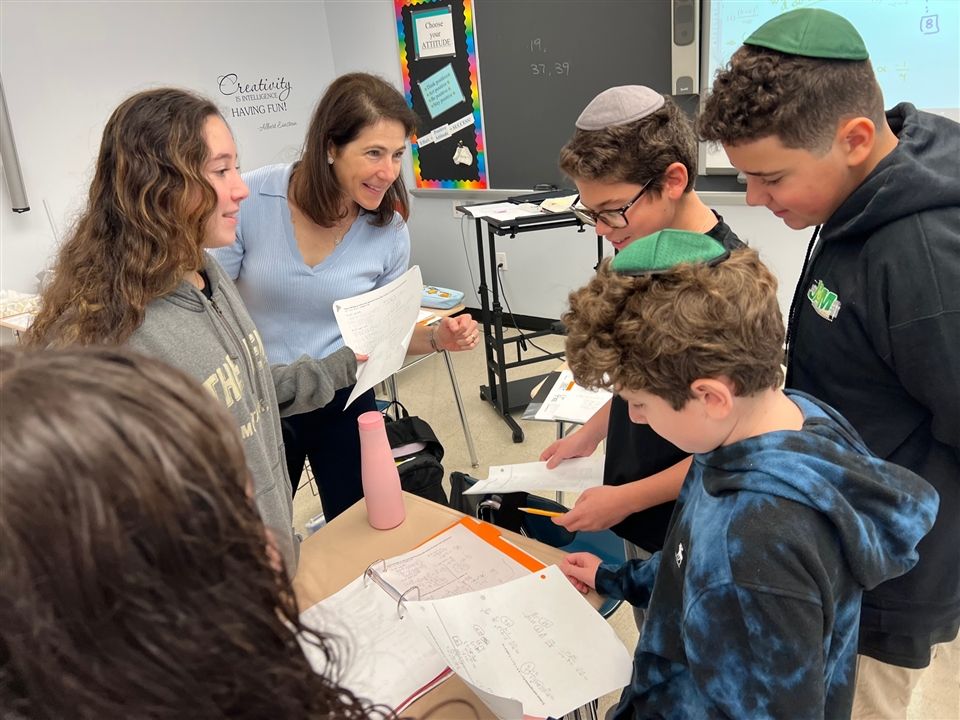 11/21/2022
My rapid tour of the GOA curriculum shifted in November to Middle School, and wow did I have a lot to learn! It began with a gallery walk displaying the graphic comics created by Ms. Jankoski and Ms. Godin’s 8th grade Language Arts classes. The students designed graphic panels (some digitally, some by hand) to tell their stories. Their subject material was intense–students depicted the aftermath of a school shooting, of several war time scenarios (one from the perspective of fish swimming under a bombed out bridge) and stories about the environment. Our eighth graders are aware of the realities outside their school, and are quick to bring their own powers of analysis and invention to understand the world.
In algebra class with Ms. Antilles, it turned out that I was not to be a passive observer. She handed me a page of problems and a pencil, and called on me along with the other students to solve equations. I was relieved that my long-dormant algebra memory came back (mostly). The students excelled at simplifying equations before solving them. But they also asked complicated questions, like what is the value of 0/0? Ms. Antilles gave them a preview of the more advanced field of calculus before returning them to the foundational skills of algebra. What a treat to learn math once again!
I also enjoyed classes in Hebrew and Judaic Studies, both in our standard curriculum and in Go Connect, in which we welcome students new to Jewish day school. A Hebrew class with Dr. Bar Guzi divided students into partners to discuss visits to the Old City of Jerusalem. Ms. Hadas Toren made rapid progress with her GO Connect students, teaching them vocabulary and helping them understand a video conversation between two girls at a bus stop in Tel Aviv. I found Mr. Lincoln Richman likewise teaching a GO Connect class in Tanakh, helping the students understand the contents of the first books of Torah while also engaging them in a deeper conversation about contemporary significance. For example, when an angel of the Lord tells Hagar to return Sarah, her abusive mistress, Mr. Lincoln put on his social worker hat (yes, he has a MSW), and spoke about protecting victims of abuse from being returned to a dangerous situation. We also considered the nuances of this story, and how each party got some benefits even as they experienced suffering.
After that the pace of my visits quickened, with up to seven classes per day. One thing that struck me was the use of kinesthetic pedagogies by our faculty. Our students were not left to sit still for entire periods, but were frequently called to move around and learn with body and mind engaged. Rabbi Mayer had his students stand on their chairs to illustrate the priestly blessing, and two theories offered by Rashi for the divine response. When I arrived at Ms. Altabef’s geography class, she asked me to supervise while she went out in the hallway for some mysterious purpose. Soon enough we were all in the hall, which she had festooned with compass points and instructions for moving # steps north or west to locate places marked on the tiles.
In Ms. Himmelstein's large classroom we left the desks to sit on awesome swivel chairs and learn the geography of India. While I usually observe quietly, I could not resist telling the students about the Jewish community in Cochin, or the time I took an overnight train, the Brahmaputra Mail, from Agra to Varanasi.
Ms. Lynch’s music students prepared presentations on popular artists like Elvis, Michael Jackson, Adele and Harry Styles. Each student came to the front, displayed their slides, took questions, and played a sample from their favorite song. Room 209 was rocking and rolling, and our 7th graders were proud to teach their peers and teachers alike.
Do you know how to draw an apple? I thought I did, but not like the lucky students of Ms. Shapiro. In her art class the students learned how to draw a torus, a donut shaped oval for the top, and then how to create effects of brightness and shadow to account for a light source off to the right. I guess I did OK, but the students offered me tips on how to improve my work–some of their drawings were rather remarkable.
Who was Alexander the Great’s tutor? Our students knew that it was none other than Aristotle, and they also learned from Mr. Ober how Greek ideas intersected with the cultures Alexander encountered during his conquest of Egypt and Persia. What makes a person great, anyway? Is it a matter of power or character? Moral reasoning is integrated with historical study to make learning deep and meaningful.
I cannot capture all the remarkable lessons that our students enjoy each day at GOA. How lucky they are to be stimulated, supported and challenged with such a variety of subjects each day at school. I feel grateful for our faculty, and also for our students, who have so much to teach the adults in their lives. And now, on to high school!
Back
1/5