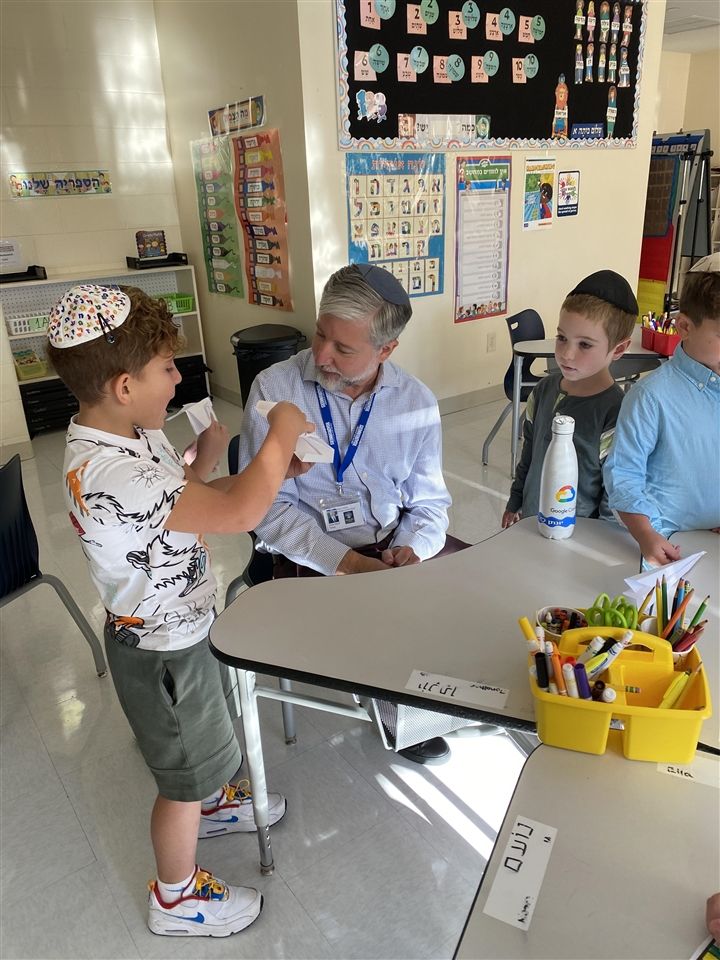 Tuesday, September 20
The third week of school this year is also the final week of 5782, and so preparations for Rosh HaShanah abound. During morning meeting at the Lower School each day of Elul, brave students step forward to blow the shofar, and the mighty sounds reverberate around the gym and up to the heavens! With Ganon A this week, I was able to color apples with the students (they offered advice on my palette) and then to teach them about the shofar. The students named many animals that have horns, including rams, rhinos and unicorns (though we do not use their horns for the shofar!). We learned the names of the different types of blasts and made them with our lips. Unfortunately, I failed to produce even a basic tekiah with the shofar. But Ganon joined me to sound a great Tekiah Gedolah with our lips.
Speaking of animals, I was rushed out of Ganon by the alarming news that a lion had gotten into the Alef classroom! It was not an ordinary lion (Aryeh), however, but AriOt, the mascot of our iTalAm Hebrew curriculum. AriOt handed each student their own book, and we said the Shehechianu prayer together. I then watched as each student learned how to write the Hebrew letter Aleph, with Morah Yael demonstrating how to make each of its three strokes, top to bottom, with the vertical lines meeting the neck and ankle of the diagonal. I was deeply moved to watch our students trace these ancient lines. As I told them, there is enormous power in letters. I look forward to learning what worlds of meaning they form from letters in the years to come!

Wednesday, September 21
Back in first grade on Wednesday, this time with 1B, the day started with some impressive feats of engineering. On the carpet several kids were constructing robots, while at the desks other engineers were constructing paper airplanes. I joined the team, quickly producing my favorite model (the swashbuckler) and watching as the kids adjusted its wing elevators to produce loop-the-loops. Then it was time to settle down to business, with Morah Yael leading us through the morning tasks. Many things impressed me, starting with the assignment of tasks such as line leader, lights adjuster, and weather monitor. As their chart says, עוזרים בשמחה, “happily helping.” We then walked down the hall to the gym for physical education, חינוך גופני, with Mr. Usher. The students settled down to learn the rules of tag, or “police” and then popped up to race around the gym with great energy and joy. It was hard to tear myself away—first grade is fantastic!
Back
1/4