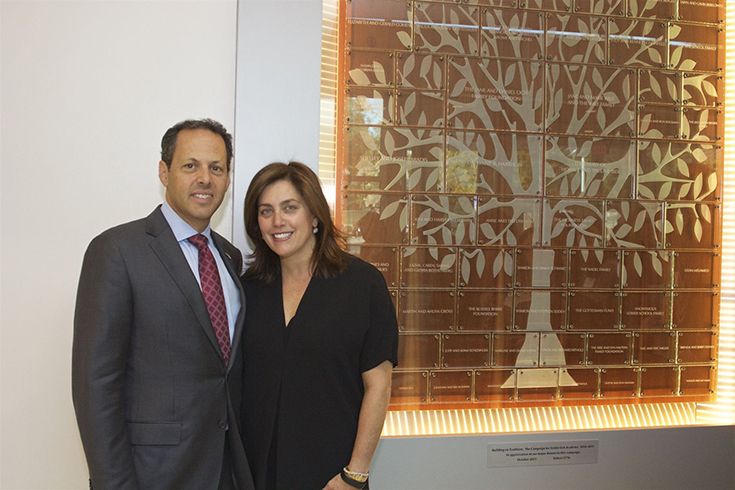 10/15/2013
On Wednesday, October 21, more than 40 major donors to the school’s Building on Tradition (BOT) campaign gathered at the Wilf Lower School campus for the dedication of our new Donor Wall signifying the official close of the campaign. The four-year campaign raised $32.5M for our school, that led to the renovation of the Wilf Lower School Campus, the addition of the Dr Lynne B Harrison STEM Center, and secured Golda Och Academy’s endowment for the future.
Head of School Adam Shapiro delivered the opening remarks thanking the donors for their transformational role in this campaign and introduced Mark and Jane Wilf who were the lead donors for the renovation of the Wilf Lower School Campus.

Stephanie Bash-Soudry, GOA’s director of development, presented gifts to the four leaders of the campaign: founding chair Eleanor Kramer, BOT co-chairs Liz Bier and Michele Landau, and immediate past board chair Sheryl Pearlstein. The four women also had the honor of unveiling the new wall.

Board chair Jeff Landau delivered the closing remarks and invited donors to tour the Lower School campus.
Back
1/1