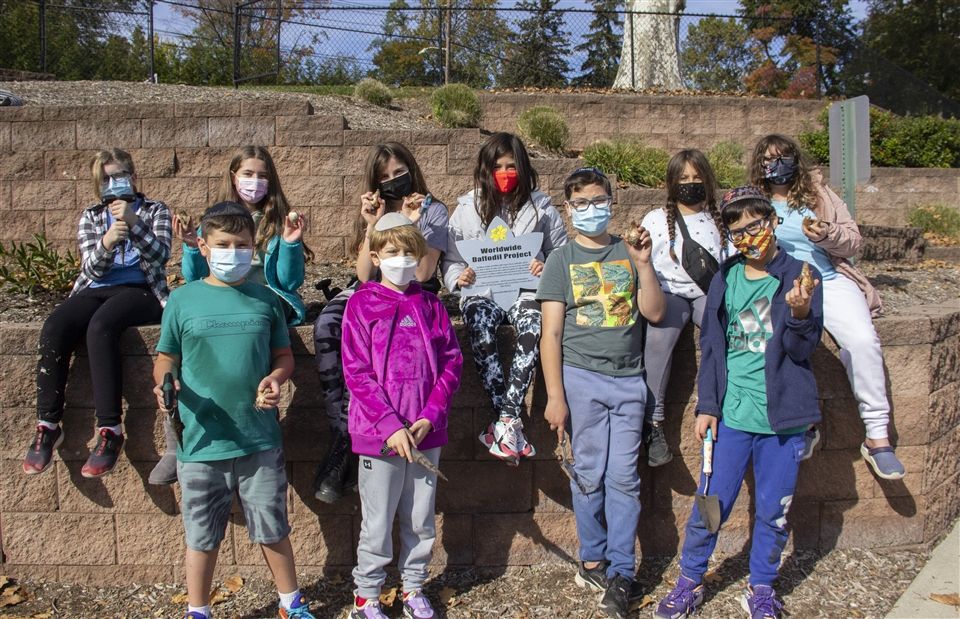 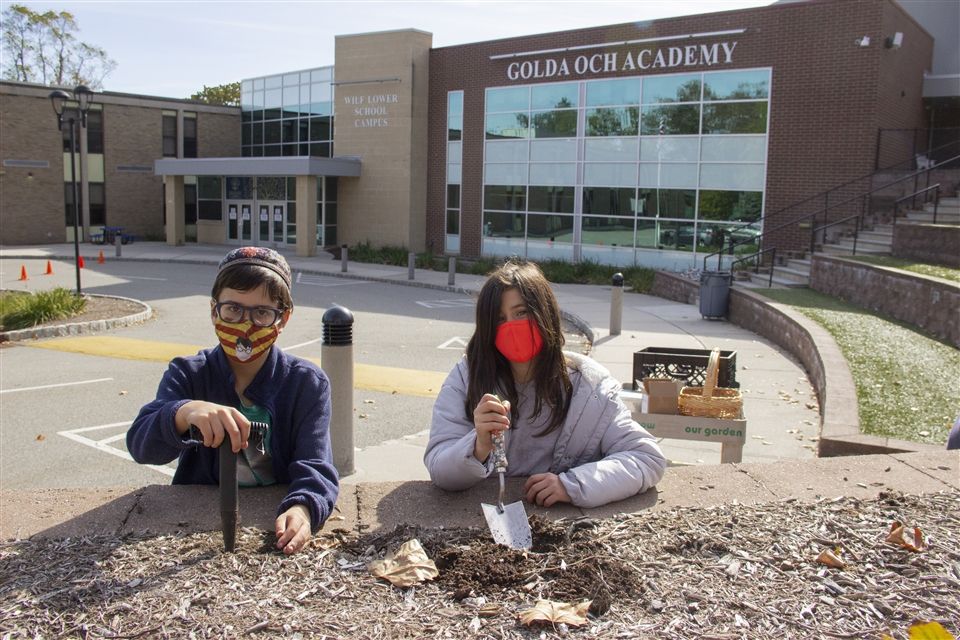 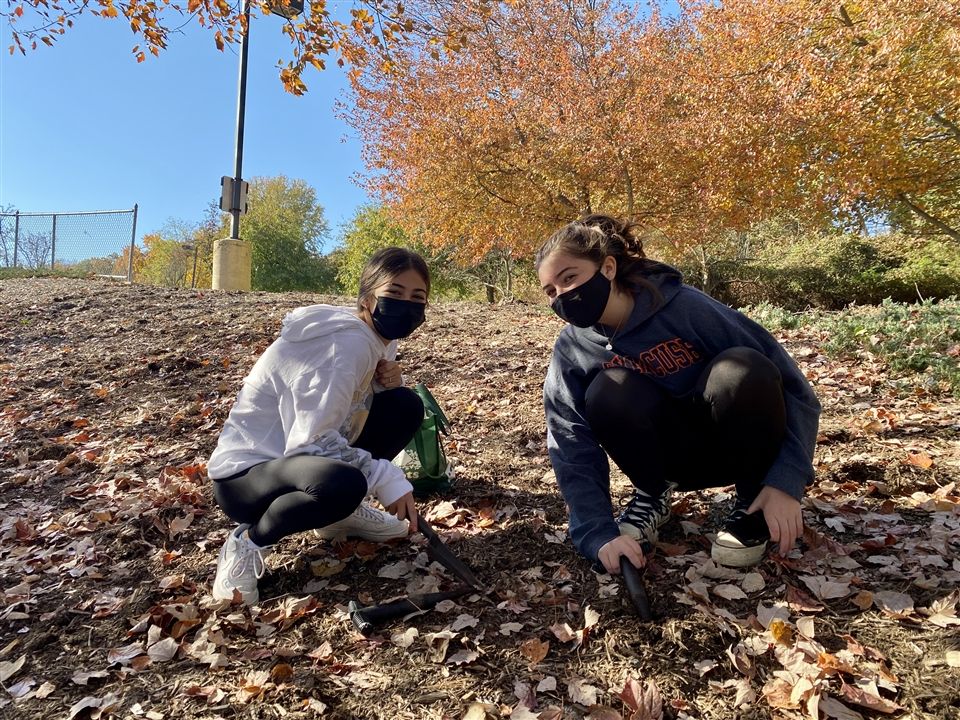 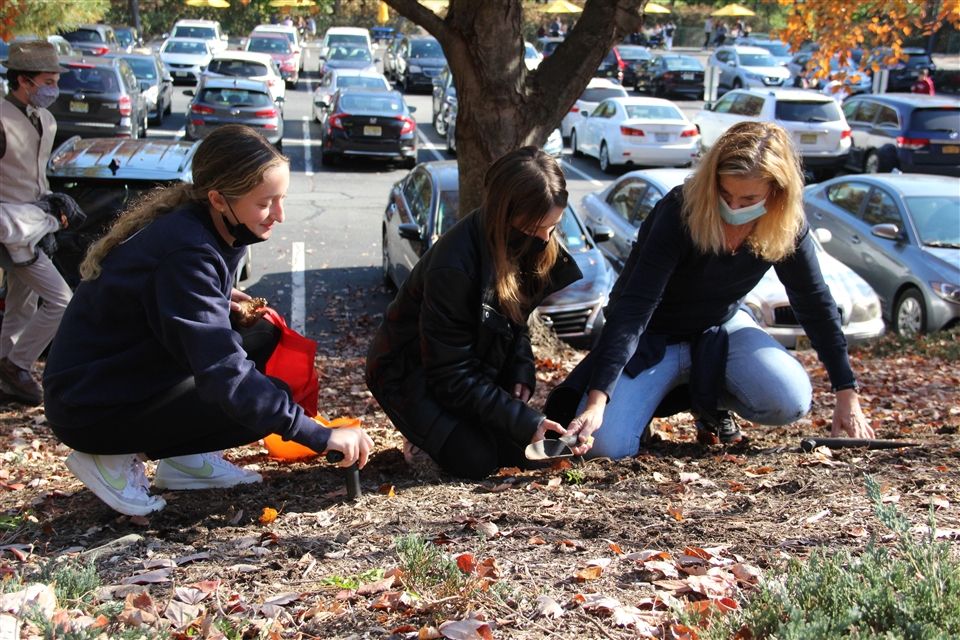 11/10/2021
Students at Golda Och Academy are keeping the memory of the children who perished in the Holocaust alive through the creation of a Holocaust garden at the school’s two campuses: the Wilf Lower School Campus and the Eric F. Ross Upper School Campus. The new gardens are being established as part of the Daffodil Project — an initiative of Am Yisrael Chai, a nonprofit Holocaust Education and Genocide Awareness Organization. The goal of the Daffodil Project is to plant 1.5 million daffodils worldwide in memory of the 1.5 million children who lost their lives during the Holocaust and in support of children who continue to suffer in the face of genocide and humanitarian crises in the world today. According to the organization, the daffodil was chosen for the project because of its similar shape to the Jewish stars the Jews were forced to wear during the Holocaust and for its color, as yellow is the color of remembrance. The flower also continues to bloom each spring, signifying hope and renewal.

To help spread awareness of the Daffodil Project, The Jewish Federation of Greater MetroWest worked to bring the project to area schools, including public, private and after-school religious schools. “The Jewish Federation felt strongly about participating in this project as a community,” said Ilyse Shainbrown, Director of Holocaust Education and Newark Initiatives at the Jewish Federation of Greater MetroWest. “Remembrance and education of the Holocaust are more important than ever with the number of survivors becoming less and less. We knew that by planting the daffodils, each person planting would be reflecting on and honoring one of the 1.5 million children that perished.”

As one of the Jewish day schools in the Greater MetroWest community, Golda Och Academy was eager to participate in the project. To coordinate efforts on both campuses, the project was spearheaded by Rabbi Meirav Kallush, Director of Israel Education; Jul McCormick, Director of the Lower School Garden; and Erin Sternthal, Associate Marketing Director and Coordinator of the Names, Not Numbers Holocaust Program. “Creating our own garden is such a meaningful way for students to remember and memorialize the children who lost their lives in the Holocaust — children who never had the chance to grow up and live the lives our students are living,” said Sternthal. “The daffodils are a powerful symbol of strength and resilience and once they bloom, will also be a beautiful reminder that out of darkness comes light.”

At the Wilf Lower School Campus, the Holocaust garden is located in the front of the building next to the outdoor amphitheater while at the Upper School, the garden is above the retaining wall at the entrance of the school. Planting at the Upper School took place on Nov. 9 and 10 to commemorate the anniversary of Kristallnacht, otherwise known as the Night of Broken Glass or the November Pogroms, when Nazi-sponsored violence against the Jews broke out in Germany, Austria and the Sudetenland region of Czechoslovakia on the evening of Nov. 9, 1938.  “We are honored to participate in the Daffodil Project this year and help create a living memorial to the children of the Holocaust,” said Rabbi Danny Nevins, Head of School at Golda Och Academy. “The gardens will also give our students, families and visitors a place to reflect and remember for years to come.”
Back
1/4